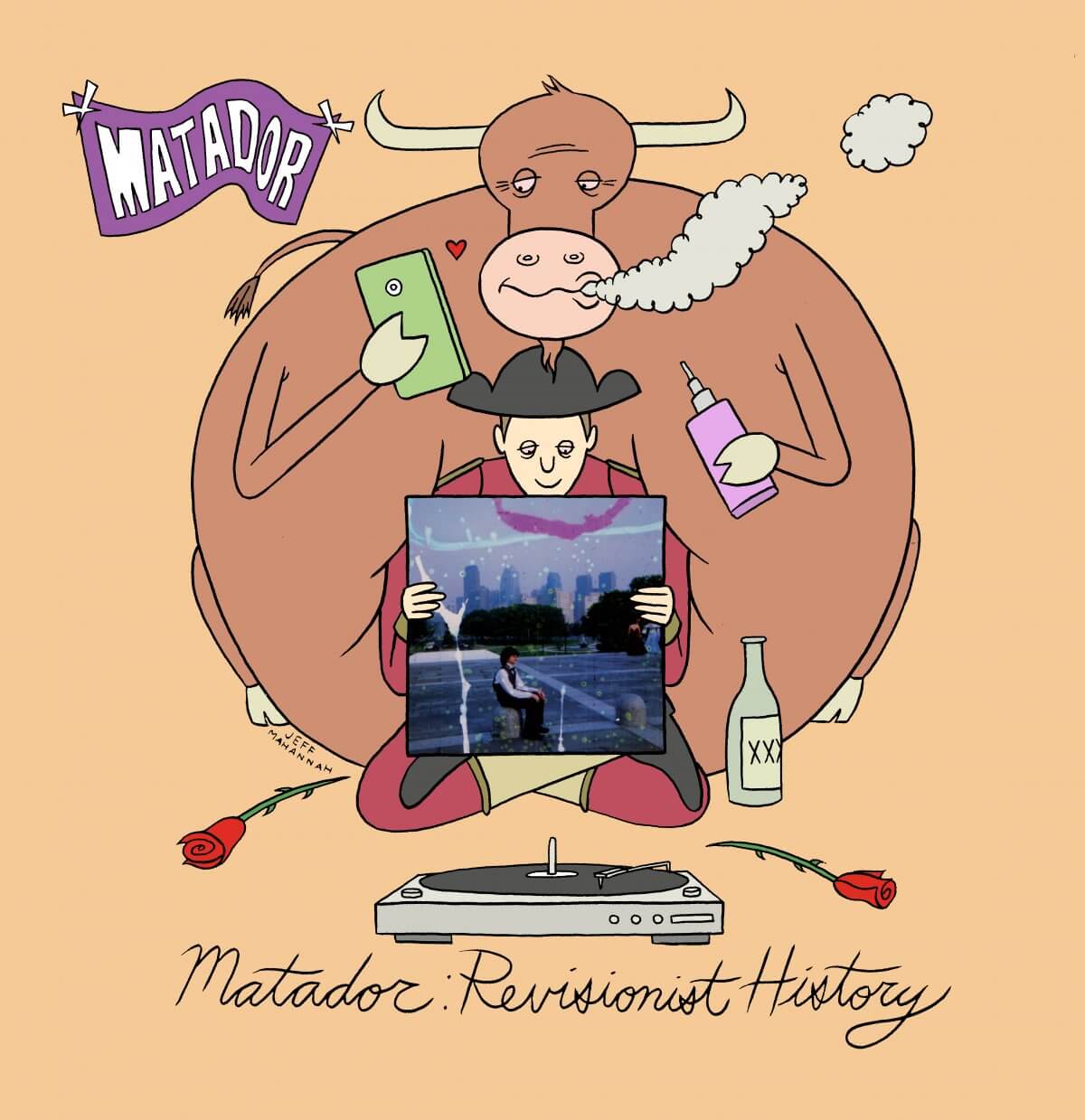 Kurt Vile’s Childish Prodigy celebrates 10 years this month. In commemoration, a limited blue edition of Vile’s Matador debut is available today at the Matador webstore and independent record stores. The reissue includes a limited purple edition of the “He’s Alright” 7″, back in print for the first time since it accompanied the original release in 2009. In case you missed it, this past week Kurt Vile released a new film, (bottle back), documenting a week of rehearsals in the Catskill Mountains ahead of the release of his 2018 LP Bottle It In. The documentary, along with a link to stream “Baby’s Arms feat. The Sadies” from the filming is available HERE.  Save 25% when purchasing Bottle It In through the end of today (Oct 11) at the Matador Webstore.

Stream/Purchase Bottle It In (25% off today) 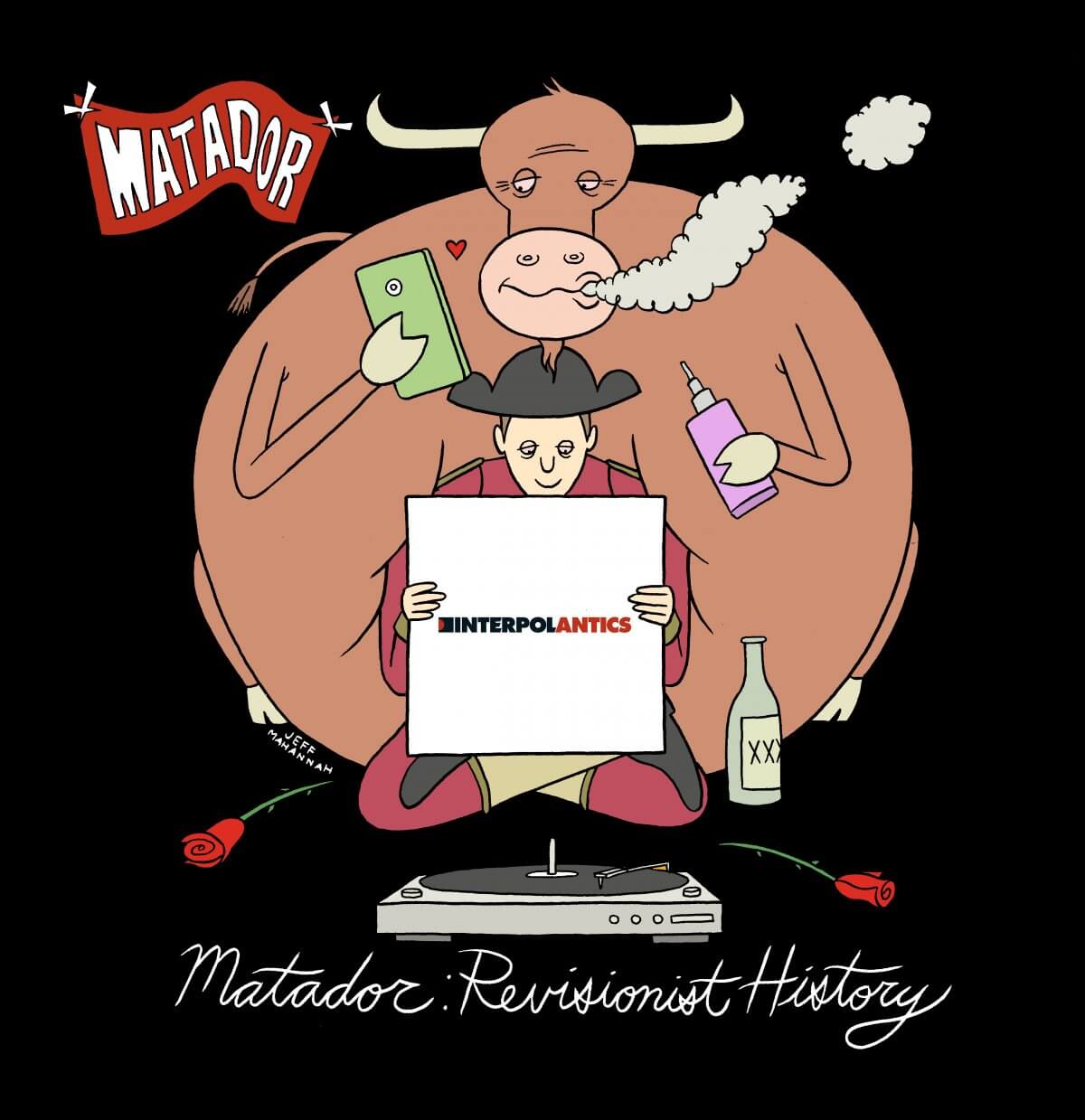 ‘Antics’, the 2nd studio album from Interpol was certified gold in 3 countries (BIG ONES) and received some of the highest accolades of the band’s career, including Drowned In Sound’s Top Album Of 2004 Award (NOTE – MALCOLM, CAN YOU FIND A PHOTO OF THE HUGE PLACQUE SOMEWHERE IN THE ARCHIVES?) . Perhaps you’ve heard the cliche, “no one ever remembers what Drowned In Sound’s #2 album of the year is,” but the Matador Revisionist History Campaign is no place for that sort of gloating or negativity.   Featuring several of Interpol’s most beloved songs including “Slow Hands”, “C’mere”, “Evil” and “Narc”, we concluded our 9/27/04 sales pitch for this classic with the words, “with Interpol, things are rarely what they seem.”  That made even less sense in context. 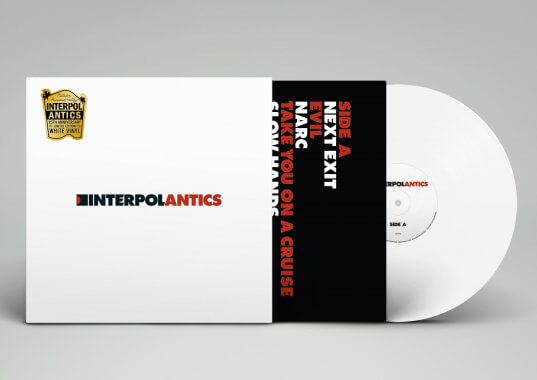 Interpol’s sophomore album, Antics, celebrates 15 years this week. Announced last month, a very limited supply of the white vinyl anniversary edition remains at record stores worldwide and on the UK and EU territories of the Matador Webstore. Save 25% on the standard LP/CD editions of Antics through next Thursday, October 3rd. 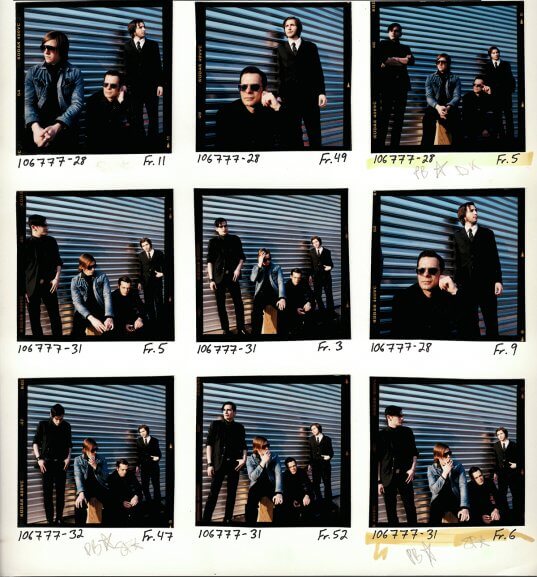 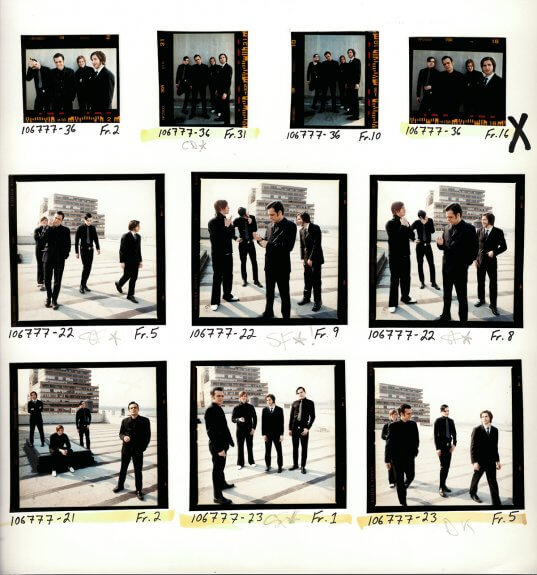 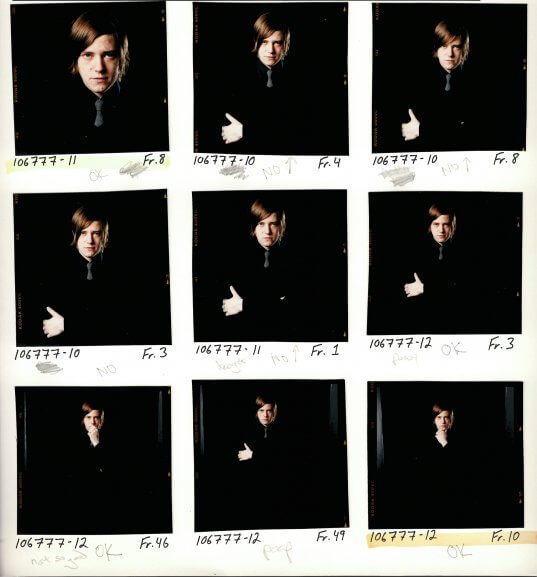 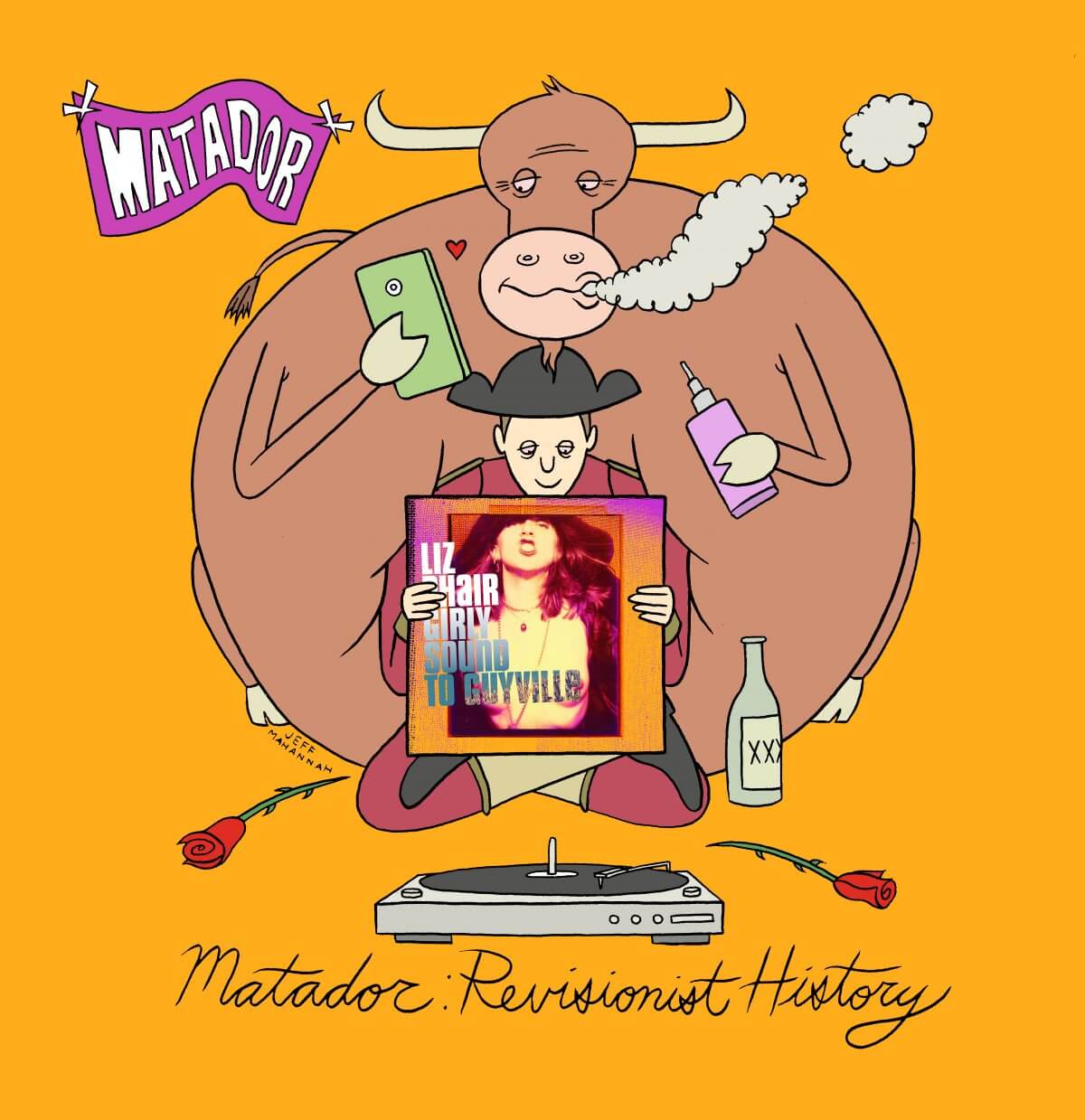 How do you follow up one of the most critically acclaimed debut albums of all-time?  Well, if you were Liz Phair — facing intense scrutiny from friends & foes alike — you put your head down and persevere with a collection of songs that resulted in her first (and only) Rolling Stone cover (and Matador’s first ban from Spin Magazine).  But it was all a huge misunderstanding!   FUN TRIVIA  :  at least one retailer objected to the couplet, “Your kisses are as wicked as an F-16And you fuck like a volcano, and you’re everything to me”.  I misheard the lyric, thought it was “M-16”, pointed out the hypocrisy of said establishment peddling RIFLES to children but drawing a line at consensual sex between adults.  Bottom line — they no longer sell any of our products but that’s ok because who wants to buy records at Bass Pro Shop? No one ever said Revisionist history was going to be pretty.

This month marks 25 years since the release of Liz Phair’s sophomore LP Whip-Smart. To commemorate the anniversary Phair’s expansive box set Girly Sound to Guyville will be available for 25% off standard list price through September 19th at the Matador webstore worldwide.

STREAM/SAVE 25% ON GIRLY SOUND TO GUYVILLE

From the archives: ’94 Whip-Smart Promotional Postcard In commemoration of the 10 year anniversary of Yo La Tengo’s Popular Songs, the 2xLP/CD will be 25% off at the Matador Webstore worldwide through September 12th. Someone at the label had the brilliant idea to rent a Tribeca theatre for a press + VIP “listening party”*  for this sprawltastic masterpiece and in retrospect, it’s not much of a party without snacks or drinks. To clarify, label staff had snacks and drinks, we just neglected to serve any to the guests.

Anyhow, I thought the playback was going swimmingly, the depth of ‘Popular Songs’ being met with rapt attention until the room’s collective meditation was interrupted by (NAME RHYMES WITH DEAN OF AMERICAN ROCK CRITICS) snoring.

Fuck it, launch parties are for NASA.  If this isn’t Yo La Tengo’s best album it’s firmly in their top 4 (I know it’s a cliche to say, “fight me”, but I’ve studied Muhammad Ali’s patented “rope-a-dope” strategy and I’m pretty confident I can persevere simply by letting you strike me repeatedly until you’re too tired to move)

(* – other than the snoring episode, the other highlight of the afternoon was product manager Todd Netter opining, “you have to admit, John Sterling is a really good announcer.” This observation was entirely unrelated to Todd bringing his tool box of talents to another record company) Back in print for the first time in over 10 years, Guided By Voices’ limited red vinyl reissue of Half Smiles of the Decomposed is available today.

“At the time of it’s 2004 release, ‘Half Smiles Of The Decomposed’ was meant to be Guided By Voices’ final album. As it turns out, Bob Pollard’s a better revisionist historian than the rest of us combined — it merely turned out to be the pause button being pressed on that particular incarnation of GBV, though given Doug Gillard’s contribution, one could argue this one sits pretty neatly alongside much of the 2010’s output. People will tell you “Girls Of Wild Strawberries” was the hit and since I’m not inclined to look up old CMJ charts (wasn’t very inclined in 2004, either) we can either presume that’s accurate or simply skip ahead to “Closets Of Henry”, which somehow didn’t make the greatest hits, ‘Human Amusements At Hourly Rates’ (sticklers for detail will claim that’s because the comp. came out in 2003, but just to put the subject to bed, let’s just say it was record company negligence).

After this, it would be another 8 years for a Guided By Voices studio album (and there were three of ‘em in 2012, OF COURSE).”

Purchase Red Vinyl / Stream Half Smiles of the Decomposed HERE. 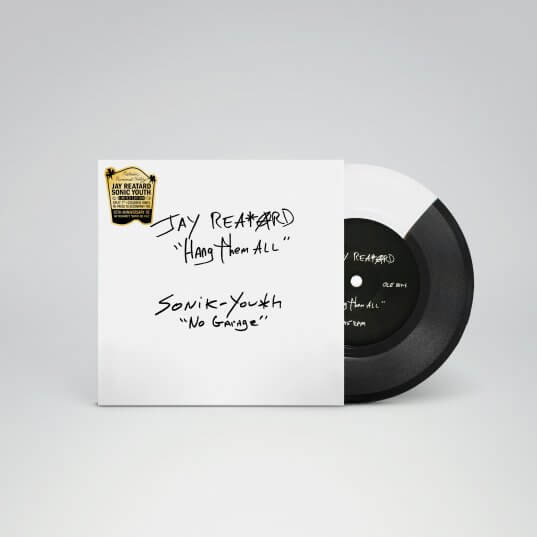 Split singles are usually the byproduct of shotgun marriages and/or sleazy cash grabs by labels eager to exploit even most the  tenuous connections between two entirely unrelated artists. BUT ENOUGH ABOUT OUR JICKS/LA GUNS single!

For entirely different reasons we’re not getting more records from the late Jay Reatard or the splitsvile-population-them Sonic Youth and it would be the height of exaggeration to claim this 2009 curio is a highlight of either’s vast discography. But that’s what Matador Revisionist History is all about, exaggerating heights!  Primo Carnera might’ve been 6′ 5 1/2 inches tall in reality, but look the fuck out for 7-foot tall Primo Canera appeals to the PT Barnum, PT Cruiser and PT Anderson in us in equal measures.
Also, maybe you slept on a chance to buy it the first time.

Purchase Split Color 7″/Stream “Hang Them All” / “No Garage”

(All profits from this release will be donated to St. Jude Children’s Research Hospital) Coinciding with the reissue of the 7″, to commemorate the 10 year anniversary of Jay Reatard’s Watch Me Fall, take 25% off the LP on the Matador webstore worldwide through August 8th. All orders of the album will receive a Matador Revisionist History slip mat while supplies last.

Stream/Purchase 25% off Watch Me Fall 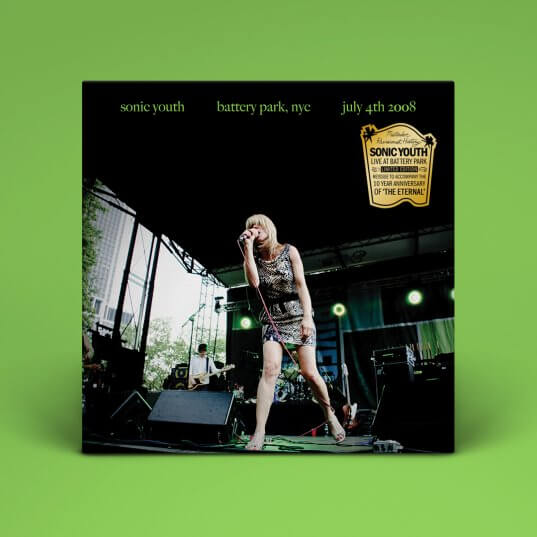 Sonic Youth’s live LP, ‘Battery Park, NYC: July 4, 2008’ is available today on LP and via all streaming services.  In addition, the band’s final studio album and lone recording for Matador, 2009’s ‘The Eternal’, is the subject of a 25% off sale now thru June 14 (LP or download).   ‘The Eternal’ or ‘Battery Park’ orders from the Matador Store (US/UK/EU customers only) receive a Matador Revisionist History slipmat while supplies last. 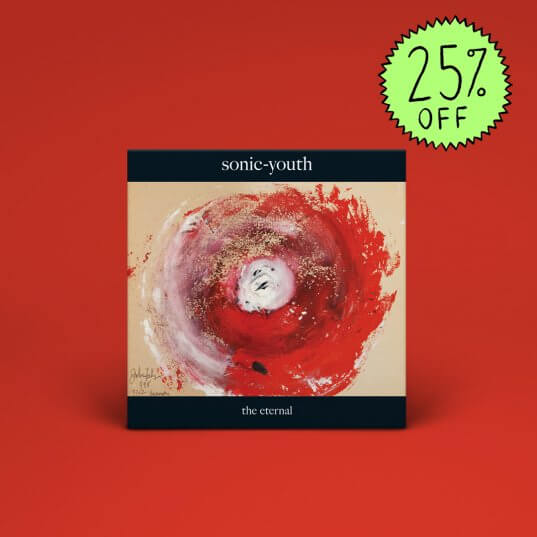 On June 7, we’ll be reissuing Sonic Youth’s ‘Battery Park, NYC: July 4, 2008’. Initially sold as a bonus item alongside the 2009 release of the band’s final album, ‘The Eternal’, the live recording will now be available on streaming services and as a stand-alone physical package for the first time ever. Culled from their show at Battery Park’s River To River Festival (and broadcast live on WFMU), the setlist spans the band’s 30-year career.

The live version of “Bull In The Heather” is now available to stream HERE.

Coinciding with the full release of the live album on June 7th, ‘The Eternal’ will be 25% off on the Matador Store from that date to June 14th.

Orders from the Matador Store include a Matador Records Revisionist History Slipmat (while supplies last). Crooked Rain, Crooked Rain is Pavement’s record-of-many transitions. From Louder Than You to Random Falls. From Gary Young to Steve West. From indier-than-thou (Matador) to FAKE INDIE (Matador/Atlantic). But most importantly, it’s the album where Pavement would flex the sort of musical and lyrical range that would later make some of you deeply resent everything else the band members ever did solidify their status as a once-in-a-generation phenomena. Except we’re still here talking about it.

Today marks the 25th anniversary of Crooked Rain, Crooked Rain’s 1994 release, and I believe it was George Santayana who said “those who cannot remember the past are condemned to repeat it.” Good thing we’ve got a goddamn photographic memory, because there’s some stuff we went thru trying to get radio stations to play “Cut Your Hair” that NO ONE SHOULD EVER BE FORCED TO RELIVE. So let’s focus on the good times and not get bogged down in gloomy stuff like the journalist last week who asked me (seriously) if Billy Corgan or Scott Weiland still bore a grudge over “Range Life”. I’m sure you think my job is super fucking easy but there’s no simple way of answering a question like that without getting the person on the other end of the phone very very angry, so if you’re ever in that situation, I suggest you handle it exactly the way I did (pretend you’re been stung by a wasp). 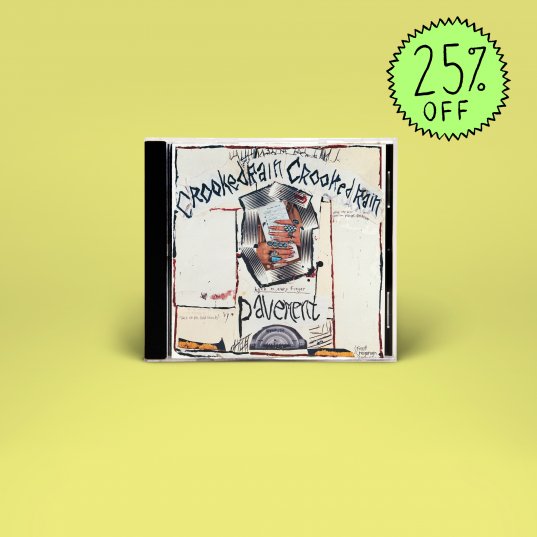 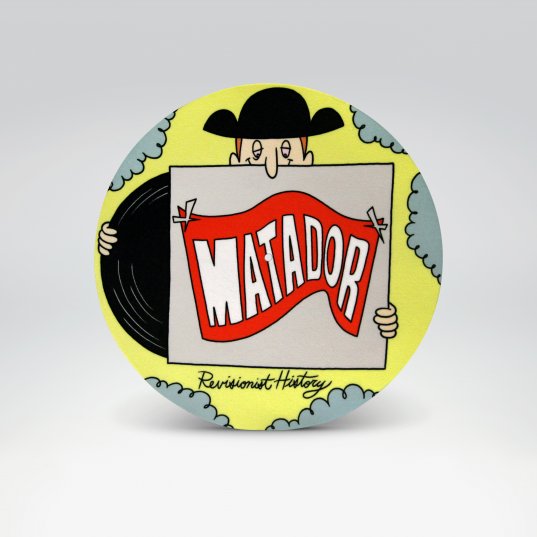 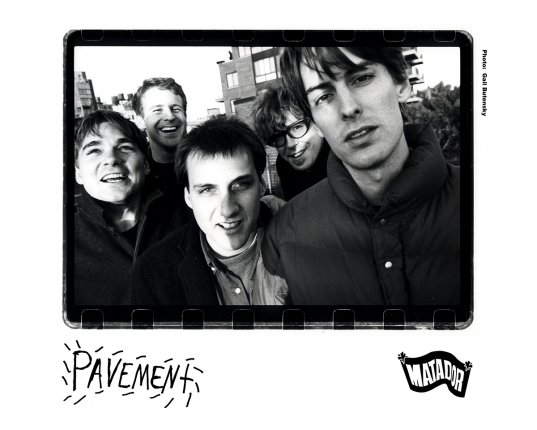