(EDITOR’S NOTE : The damage done to Norton Records‘ Brooklyn warehouse by Hurricane Sandy has been covered elsewhere ; if you’ve already purchased the mix CD’s mentioned below at the Maxwell’s shows, you can still help Norton out with a donation here For everyone else, the following message was sent to the Yo La Tengo mailing list earlier today).

Hi everybody,
Thanks to all of you who were able to attend this year’s Hanukkah shows at Maxwell’s, and I hope those of you who could not followed the bouncing ball here.
As we’ve done the last two years, we’re going to make the mixes that Georgia, James and I compiled available to you the downloading public for 24 hours: noon Friday December 21 until noon Saturday December 22, and that’s eastern standard time. These are drawn from our record collections–the music is not BY us, just SELECTED by us.
Each download will cost $10 and every penny will be donated to our pals at Norton Records, who were very nearly wiped out by Sandy. (Read all the grisly details here. But wait! there’s more . . . you will also have the opportunity to pick up two custom mixes from the incredible Norton catalog, one compiled by Miriam Linna and one compiled by Billy Miller.
And we’re still not done!! The good people at Three Lobed Recordings have graciously allowed us to offer downloads of the mix we sold during night six.
All you’ve got to do is go to http://www.yolatengo.com/forsale/ on Friday at noon.

Yo La Tengo kicked off their annual 8 nights of Hanukkah last night at Maxwell’s in Hoboken. As always, each night features special secret guest bands, comedians and mix CDs. Last night featured the Raybeats, comic Emo Philips and a mix by the legendary Tom Scharpling.

Everybody who works on Yo La Tengo Hanukkah donates their time, and the entire proceeds go to charity. A considerable amount has been raised over the years for deserving causes. This year’s proceeds will all go to Hurricane Sandy-related charities. Last night’s income went to the Rebuild Hoboken Relief Fund. Hoboken was hit particularly hard by the storm – there is still no direct PATH train service between Manhattan and Hoboken, and it is not expected to return until 2013.

The band have made their usual diary entry on their site about last night. Read it for more details.

Yo La Tengo’s new album Fade comes out on January 15. You can preorder it on iTunes now if you want the digital version, and get an instant download of “Before We Run.” Or if you prefer physical media, the Matador Store offers a preorder of the CD, the vinyl, or the deluxe vinyl with a bonus 7″ and 3 exclusive extra tracks. The deluxe vinyl + 7″ will be available exclusively from us and from independent retail stores that carry Matador releases. Hi folks,
First things first.  Hanukkah, December 8 – 15, Maxwell’s, Hoboken, NJ. It’s on. Be there or be somewhere else.
If you’re among the many who have asked about this in recent or not-so-recent times and gotten no response or an evasive response, we apologize.  We put off the decision to play this year for way too long.
Tickets will cost $35 and go on sale at noon eastern time on Monday.  Last year they sold out extremely quickly, so no dilly-dallying.  If you’re new to our Hanukkah shenanigans, it goes something like this:
Each night, Yo La Tengo will perform at Maxwell’s.  There will be an opening act and a comedian, and who knows, maybe some other surprise.  At this juncture, we don’t have any idea who will be joining us, and we wouldn’t tell you even if we did.  The proceeds will go to charity.  If you want to know what’s happened in years past, check out the various Hanukkah diaries at yolatengo.com.  And rest assured that this year is bound to be completely different.

To get tickets, go to Ticketfly.  The link will appear at noon (eastern) Friday, and–I’ll repeat that–tickets will go on sale at noon Monday Oct 22.  A limited number of tickets will also be available at Tunes in Hoboken and Other Music in Manhattan. The following was posted at Yo La Tengo.com earlier this evening ;

Hi everybody, especially those of you with tickets to next week’s shows,

We strive to make our Hanukkah shows unpredictable, and in one unfortunate regard we’ve outdone ourselves this year. I’m going to be a little vague here, but I had a pretty serious health scare earlier this month. I’m well on the way to recovery, but I’ve not yet been deemed ready to Rock. The good news is . . . well, the good news is I’m on the way to recovery . . . but vis-à-vis next week, the good news is that I’ve been deemed ready to sit in a chair and play the concerts that mean more to me, Georgia and James than most anything else we do together. Our sets will undoubtedly be tweaked accordingly. In other words, if you were hoping to be in attendance for our annual airing of “Mushroom Cloud of Hiss,” I’m afraid that is now zooming up the Unlikely chart with a bullet. But we’re confident that it’s going to be a great eight days. We’re looking forward to seeing you all, and to not answering any questions about what happened to me!

As long as I’ve got your attention, I’ll let you know about one other change this year. We’ve filled the walls of Maxwell’s front room with a bunch of posters and other ephemera from our various closets. Some of it will be for sale (all proceeds to charity) and all of it will hopefully be entertaining. 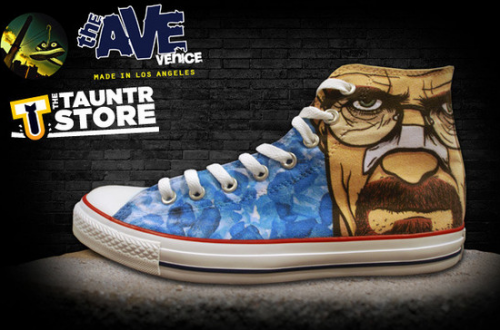 link courtesy VHS Summer. The W.W. signature Pontiac Aztek is well beyond the means of the average Matador Records-buyer, so perhaps these sneakers are a better holiday option.

(image taken from False 45th, merch from Hanukkah 2007, and a lovely tribute to one of the more shy and retiring Jewish artists of all time)

JULIA RYDHOLM, The Ladybug Transistor
“Sugarcube” from I Can hear The Heart Beating As One

I have a lot of favorite Yo La Tengo songs, but I am going to single out “Sugarcube”. I love how the song kicks off with a lawless, tumbling drum fill, barrelling into the disciplined, driving, over-driven guitar chords that sustain the frame of the song. I love the song’s metamorphic layers of fuzzy chords, persistent shakers, splashy cymbals, and hazy vocals with Ira’s guitar solos weaving through the lot of it. I love that the song sounds like the blurry, night-windowed artwork on the back of the album. I love that the tension between the head-over-heels drum introduction and the song suddenly trying to get a hold of itself, is mirrored in the lyrics’ struggle with over-the-top acrobatic desperation and trying to keep one’s cool. I love that the lyrics sound like the mantra anyone really feeling something recites to reassure oneself, and wants to, but tries so hard not to plead out loud to the one they want.

GLENN MERCER, The Feelies
“Stockholm Syndrome” from I Can Hear The Heart Beating As One

This song has that open-chord, campfire-strum that we often use in the Feelies. It also has a hint of a 50’s vibe that appeals to me. Nice solo. 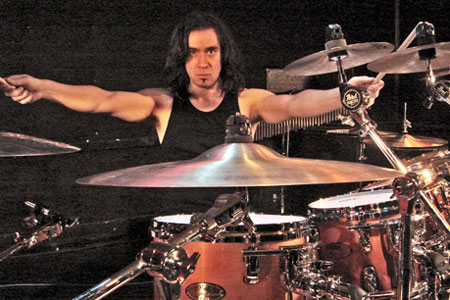 I got married this year, and we used this song for our first dance at the wedding. My wife loves it and I love it and James sings so sweetly on it. I asked him what the lyrics were about, and he told me that it was a message from him today to himself in the past, circa 2005. A message to hang on.

BRITT DANIEL, Spoon
“Saturday” from And Then Nothing Turned Itself Inside Out

This song sends me to another place. That’s powerful, huh? The first time I heard it, it was one of those preview tracks you get to download for free before the record comes out. It must have taken me an hour or two to download it and I remember writing a friend at Matador immediately after hearing it the first time and saying “This has got me excited!” I don’t know, I love it. Every hazy, offhand element comes together into one creepy but magical focus that always gets me.

LAURA CANTRELL
“The Summer” from Fakebook

The Summer – Yo La Tengo

My favorite Yo La Tengo song is “The Summer,” it just has this lovely vibe to it, a lot of feeling packed into a few words, simple but really effective; the recording too is sweetly moody. I’ve also long been a fan of their version of Gene Clark’s “Tried So Hard,” which just precedes “The Summer” on “Fakebook” — I was pleased many years ago when I requested it at a show and they actually played it! Gene Clark might not have been Jewish, but it would be a good request for one of their Hanukkah shows!

(the above tee — designed by Stephen Hunking, based on an original work by Raymond Pettibone, marked Yo La Tengo’s December ’08 eight night stand in Hoboken, and is still available)

Yo La Tengo are taking a rare year off from their annual Hanukkah shows at Maxwell’s —they’re in Japan right now — and as a result, we polled a bunch of famous name YLT fans and asked them to pick their favorite song from the trio’s vast back catalog.  Ideally, we’d planned to roll one of these out each night for 8 days (get it?)….but then the Beggars Group Holiday Party happened….and we all lost our wallets, keys, laptops and senses for a few days.   So we’ll start with 5 today, alright?

CLINT CONLEY, Mission Of Burma
“The Race Is On Again” from ‘I Am Not Afraid Of You And I Am Going To Beat Your Ass’

To me this song is typical of YLT finding their way into a quiet corner of the Indie-sphere that hasn’t been raked over by the hordes, and is theirs alone.   Sweet and beautiful melancholia .   With chord changes that feel fresh every time I hear them.

BRIAN TURNER, WFMU/The Mad Scene
“Deeper Into Movies” from ‘I Can Hear The Heart Beating As One’

Deeper Into Movies – Yo La Ten…

Some YLT songs kinda crack open more and more instrumentally, spiralling up to a total frothing pot of epic noize but never obliterating the fabric of the song and how it’s structured. This one is definitely one of the ceilings in that realm; there’s vocal unity and a swoony melody with a repeated mantra that pokes through as the chaos builds, and it’s really lovely. Anarchic but centered, never forgetting the song and its progression. It’s almost like the Beach Boys backed by a Sonny Sharrock-fronted Rallizes Denudes or something insane that shouldn’t work but does perfectly. 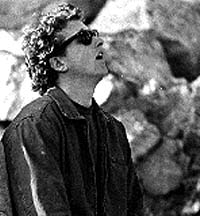 DAVID KILGOUR, The Clean
“From A Motel 6” from ‘Painful’

I’ve had the pleasure of playing this with Yo La Tengo a few times. They gave me the job of the slide, which I gleefully took.  A unique song from a unique band. Of course I’m biased, but who ain’t?!

My all time favorite YLT song (for now) is Big Day Coming.  And the fact that there are two of them only doubles my pleasure. That’s saying quite a bit too as I have over fifty-seven favorite YLT songs. And that, for reasons I won’t go into here, Yo La Tengo will forever be associated with severe stomach cramps and extreme nausea and I STILL love them very much.

The title still haunts me like a Halloween movie.  Sure, I have many other favorite YLT songs, but play this one for me and I’ll most likely not recognize it.  To me, that really speaks volumes to the special nature of this particular song.