The Beat Your Ass Season Pass

(photograph by Michael Lavine)
Matador is providing exclusive bonus material along with pre-orders of Yo La Tengo’s upcoming ‘I Am Not Afraid Of You And I Will Beat Your Ass’ (ole-692).

When you pre-order the album from a participating retailer’s web site, you’ll receive a follow up email with directions for accessing the Season Pass web site via a unique coupon code. Every few weeks, the site will be updated with exclusive bonus material including:

– A player streaming the full album
– A digital booklet with album artwork, photos, liner notes and YLT
discography
– Exclusive mp3s available only to Season Pass members
– Advance notice on all ticket sales for the fall tour.
The full scoop can be found here.

In an unrelated story, Yo La Tengo’s upcoming Asbury Park show at the Stone Pony (9/25)…is no longer upcoming. I cannot stress strongly enough that this cancellation has nothing to do with the alleged feud between James McNew and Southside Johnny, much of which was blown way out of proportion by the irresponsible rock press. The whole thing is water under the bridge, and we’re hopeful that someday, someway, Johnny will invite Yo La Tengo to appear on his IFC chat show. I’ve not actually seen the program, but friends at the label have nothing but good things to say about it.

Chris, Patrick…the next time we sign a band, could you at least send me an email or a text about it? I’m really tired of finding out the hard way. Thanks. GC

Pundit/comedian/professional douchebag Dennis Miller has landed a new gig with Fox News. For the San Francisco Chronicle’s Mark Morford, “the transmutation is complete”.

Something happened to the once-brilliant Dennis Miller. It started about a decade ago and has since turned the man from one of the funniest and smartest and most intellectually wry observers of culture and political attitude in the country (no one could weave an obscure literary sub-reference into a long joke about, say, the senior prom like Miller) into some sort of warped war-supporting Bush-loving right-wing sycophant.

I have heard bits of his rants in the past few years. There is no joy left in his perspective. There is no sparkle of lightness or pleasure in his eye. It is only dryness and lashing out and death. He used to be the smart-ass cousin of Bill Hicks and Lenny Bruce. But now you hear him and you can’t help but think: Something hard and sharp and ugly has eaten him alive. Miller claims it was 9/11 that changed him. True enough. He appears to have sacrificed his once-nimble mind and forsaken all perspective to drink the Kool-Aid of the Dark Side, and has become a full-blown Republican. And it’s a sad thing indeed.

Political sensibilities aside, this is sort of like harkening back to the days when the Goo Goo Dolls were good. Or recalling the times when Dr. Harold Shipman was fun to hang around with. I’m sorry, Mark. Dennis Miller has always been smug, unfunny and throughly deserving of being shoved down a flight of stairs. He didn’t start sucking after 9/11, he was doing it before he was born.

That said, if nothing else, Jay Mohr’s career path should be clear from this point onwards ; 2010 – delivering copies of the New Hampshire Union Leader.

Coincidently, said paper’s weekend edition features an interview with Lou Gramm of Foreigner. If anyone would like to discuss a long-ago and far-away era in which Foreigner were as brilliant as Dennis Miller, please, take it up with this man.

kidz bop always tops billboard when it comes out. being a musician and a parent, this video scared the shit out of me. watch for the asian kid after the tiger does this splits.

….and neither is heavy advertising on Comedy Central.

Ultimately, with executives and other analysts unable to predict how moviegoers, unsettled by the news events, will be affected, the studio decided not to change its in-place marketing plans.

Given the current sensitivity to the issue, we might not see that ad nearly as often in the days ahead. That said, PepsiCo has shown a willingness to have some fun with a serious moment in history, so perhaps we can look forward to a series of comedic vingettes about the long-term effects of heavy benzene consumption.

This New York-based singer/songwriter attacks relationship troubles with jangly thriftshop guitars and lyrics that cut away the psychological doublespeak that prevents most coffeehouse crooners from actually saying anything. The highlight of O’Connor’s third album is the excellently titled “Bullshit Maze,” a little marvel of straightforwardness. “You’re always asking if it ever gets to be too much for me, ” she sings over a beer-buzzed Nashville shuffle. “Well, yes, it does.” – Spin

Jennifer’s fantastic new album, ‘Over The Mountain, Across The Valley And Back To The Stars’ (OLE 686-1,2) will be in shows on August 22, but you can preorder it today. The 150 gram vinyl version comes with a coupon for an MP3 download of the entire album.

Ahem. Though the forthcoming Cat Power & The Memphis Rhythm Band dates are undoubtedly a big deal, Chan Marshall is still a musical magician all by her lonesome.

Johnny Mac’s chat show career lasted slightly longer than Magic Johnson’s.  Only the former had the good taste to let Yo La Tengo perform “Today Is The Day” on his program.

Yo La Tengo, coming to a comfortable concert auditorium near you.

Everclear’s Art Alexakis vs. Bill “You Make Me Feel Like A Whore” O’Reilly. (link swiped from Stereogum)

I’m trying to program TiVo to make sure I don’t miss Marcy Playground’s appearance on “The Colbert Report”, but the on-screen menus are way too confusing.

(snazzy image swiped from here. due to severe label budget cuts, that’s the vehicle they’ll be traveling in, by the way)

= this. (MP3, link courtesy WFMU’s Beware Of The Blog, Dez on vocals, Robo on drums…cue up sound effects of editor’s head exploding)

…but did they have to redirect traffic here?

Though I’m sure our terrific legal system will sort this one out, isn’t there a way that both the plantiff and the accused can be sent to Camp X-Ray, at least for a few weeks?

Hawthorne Heights has filed a lawsuit against its record label, Victory Records, and label head Tony Brummel today (Aug. 7). The band claims that Brummel’s “overly-aggressive, unethical and illegal schemes and tactics,” including physically threatening music industry figures and scheming against other artists, have severely damaged the band’s reputation and its relationship with fans.

In February, Hawthorne Heights and Ne-Yo were vying for the top of The Billboard 200. On Feb. 28, an email from someone at Victory appeared to urge its street promotions team to tamper with Ne-Yo’s sales potential. “If you were to pick up [a] handful of Ne-Yo CDs, as if you were about to buy them, but then changed your mind and didn’t bother to put them back in the same place,” the message read, “That would work … just relocating a handful creates issues.”

Within hours of the email’s appearance on an industry message board on March 1, a second email appeared calling the first message “a joke.”

Band members Eron Bucciarelli-Tieger, Casey Calvert, Micah Carli, Matt Ridenour and JT Woodruff claim that Brummel then signed the band’s name without their knowledge or approval to a so-called manifesto, which falsely stated that the band believed it was in some type of war with artists in the hip-hop and R&B music genres, leading many to brand the band as racist.

The members of H.H. say their most recent album reaching no.3 on the charts “is now tainted much like Barry Bonds’ statistics,” an interesting analogy from guys who don’t wanna be called racists, and perhaps a more fitting one had they reached no. 1.

Anyhow, I look forward to these two parties kissing and making up, as I suspect at the end of the day, they’re made for each other. To paraphrase the Del Fuegos from their excellent Miller Beer commercial, “good luck to all bands.”

All dates supporting She Wants Revenge. They say revenge is a dish best served cold, but as cannibalism is against the law in most of the states on the above schedule, please be advised that eating utensils are likely to be confiscated at the door (sorry).

Washington DC’s…rather, one of the Planet’s great live bands returns to the left coast :

If you’re not the traveling sort, you can enjoy the Rhino podcast performance/interview with Dead Meadow’s Jason Simon and Stephen McCarthy here.

DM bassist Steve Kille has a new project, Rumpville, described as “children’s books for adults”.  That sounds way more appealing than a Dan Zanes CD, but if you’re a child and you’d like to disagree, please feel free to write in (with your parents’ permission, of course).

example a, from Greg Kot’s Lollapalooza coverage in the Chicago Tribune :

1:12 p.m.: Subways singer Billy Lunn leads his U.K. trio in a set that is high on energy, low on innovation with three-chord anthems that make Oasis sound like progressive-rock. Lunn complains about the state of U.S. commercial radio and blames it all on payola. He should know. His Warner Brothers record label just paid $10 million in fines as a result of a payola investigation by New York State Atty. Gen. Eliot Spitzer.

example b, Her Jazz’ Maria on Phoenix, French Kicks and the A-Sides performing at a Camel cigarettes sponsored event.

I’m not going to mention the health issues surrounding smoking at all. Nope, not one peep from me. However, I will politely point out that Camel’s parent company, Reynolds American Inc., has donated 87% of its political contributions to the Republican party. Conservativecocainesexjams all night long! Enlist with the party train soldiers! Get rad in Iraq! And with all the smoking going down tomorrow night, no one will notice how truly crappy Phoenix or the French Kicks are. As Philabuster pointed out, the French Kicks couldn’t even fill the North Star last time around. What sort of dumbass in Camel’s marketing thinks they can pack a 1,000-person venue? And how many years has it been since they’ve written anything remotely worthwhile? 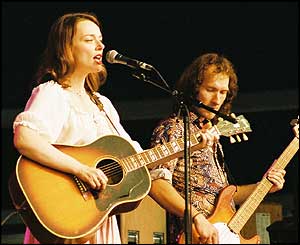 The Boston Globe’s Suzanne Ryan had the distinct pleasure of attendending a TV critics’ summer conference in Los Angeles recently, a occasion presumably designed so the various networks could showcase their offerings for the upcoming fall season. W.C. Fields’ admonishment, “never work with children and animals,” apparently never reached Anne Heche, but were Fields alive today, “never work with Anne Heche” could well be useful advice for the American Broadcasting Company.

ABC is launching a new drama starring Anne Heche, a New York relationship coach who finds herself stranded in Alaska. In the pilot episode, she is freaked out when she discovers a raccoon in her hotel’s closet.

During a press conference, reporters wanted to know all about the raccoon, whose name is Elvis.

Is that a real raccoon or an animatronic? (Real)

Did you fly him into Vancouver to shoot? (No, a local hire)

Is he a recurring character? (Yes)

In the pilot, Elvis had a STUNT DOUBLE that ran down the stairs for him? (Yes, a DOG NAMED BOOMER DONNED A RACCOON SUIT for a staircase scene since raccoons don’t run, they lope).

Since raccoons are noctural, did you wake Elvis up to shoot? (Yes and Anne pet him to make him feel better)

Later, a Touchstone Television publicist told me with all seriousness that he and his co-workers had tried to anticipate every question we reporters might have tossed out but no one even thought about Elvis.

“We should have brought him here,” he said sadly.