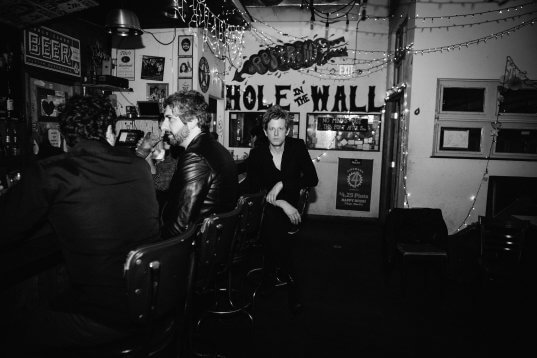 This morning we’re pleased to make available the demo version of Spoon’s much-beloved “Inside Out”, the studio version of which appeared on 2014’s ‘They Want My Soul’.   Speaking with Entertainment Weekly, Britt Daniel recalled, “I wrote that on piano. It was just the chords and a melody, and I remember singing it for my girlfriend and at the time and she was not impressed. I was like ‘Are you kidding me? I know this is fucking great! And then it kind of just existed as this piano vocal song for a long time. I knew something was good about it but we were making  ‘I Want Your Soul’ and I didn’t want to have just a vocal and piano song on there, it felt we had done that too much already. So we put a beat to it that was sort of stolen from this Dr. Dre song. Then we used that kick-snare pattern and Alex [Fischel, keyboards and guitar] came up with the idea of a harp sound on a keyboard. Then it sounded like something we’d never done before.”

There’s a lesson of some sort in here but our office is already awash in “I-told-you-so”-isms already (if that’s a thing) but the important part to focus on is that during a period in which we’re shining a spotlight on Spoon’s past works, more cool artifacts from the band’s vault will be unleashed in the days ahead (November 19, December 3 and December 10, to be exact). Play along by utilizing hashtag #spoontbt if you’re inclined.

stream/downnload “Inside Out” (demo)
stream/order ‘Everything Hits At Once : The Best Of Spoon’