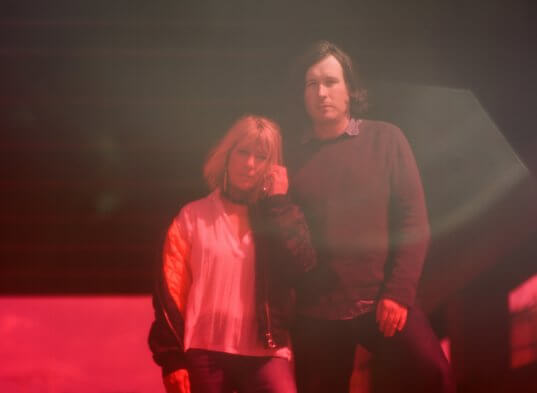 On July 13, we’re releasing the new album from BODY/HEAD, ‘The Switch’. The duo of Kim Gordon and Bill Nace recorded their 2nd studio album for Matador last summer in Western Massachusetts with engineer Justin Pizzoferrato and the results are equal parts dizzying & intense. Summer & Autumn U.S. dates are listed below, with several of the shows in question already on sale.

Creative alchemy doesn’t just happen in the studio or in the practice space; so much of it is the product of solo time with one’s instrument, learning how body and wood and electronics fuse, and of subconscious processes as one lives one’s daily life—picking up the ambient noise of the world outside, listening to others’ work, talking through ideas with friends. For Kim Gordon and Bill Nace, time together these days is limited to live performances and recording, so they’ve got to bring all their magic to every encounter. Lucky for us, these are two experimental sorcerers of significant renown.

Their debut album together as Body/Head, ‘Coming Apart’, from 2013, was more of a rock record—heavy, emotional, cathartic, spellwork in shades of black and grey. T’he Switch’ is their second studio full-length, and it finds the duo working with a more subtle palette, refining their ideas and identity. Some of it was sketched out live (if you’ve not had the fortune of seeing them in that natural environment yet, see 2016’s improvisational document ‘No Waves’), but much of it happened purely in the moment. Working in the same studio and with the same producer as ‘Coming Apart’, here Body/Head stretch out, making spacious pieces that build shivering drones, dissonant interplay, Gordon’s manipulated vocals, and scraping, haunting textures into something that feels both delicate and dangerous. Less discrete songs than one composition broken up into thematic movements, a slow-moving narrative that requires as much attention and care from the listener as it did from everyone involved in its creation, it is a record that sticks around after it’s done playing.

This is Nace’s favorite of Gordon’s guitar work; she’s truly come into her own as a guitarist, having built up her confidence through solo shows. The way the duo work together, you’d never know they spend so much time apart; on ‘The Switch’, their vision and focus feel truly unified. If Coming Apart was dark magic, ‘The Switch’ works with light, though it never forgets that these approaches are two sides of the same coin, and that binaries—black/white, near/far, emotion/analysis, body/head—are made to be broken open, and that the truth of things is in the energy between.