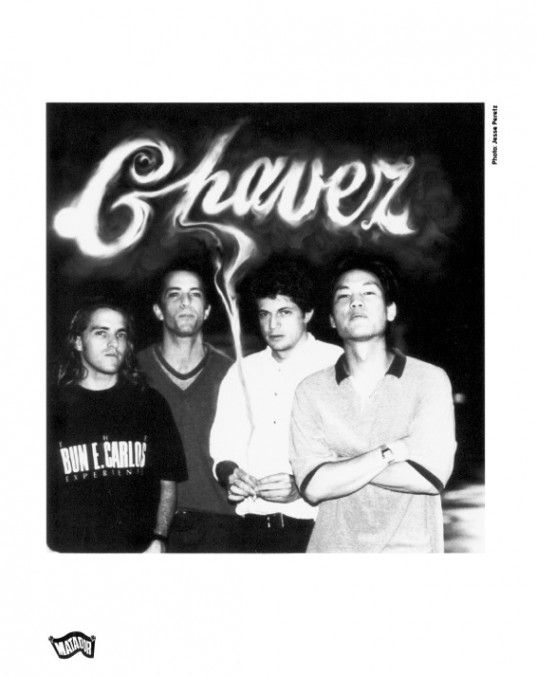 Here at Matador Records and Filmworks, we’ve long lived by the credo established by our founder, Chris Lombardi, who once declared, “give the people what they want. Especially if it’s easily accomplished and/or lucrative for us.” And with that in mind, we have listened to the pleas and threats of YOU, the music fans still devoted to paying for physical goods, and can finally announce that after 12 long years in the out-of-print wilderness, we’re reissuing both of Chavez’ Matador albums on vinyl on January 20, 2015

(“Break Up Your Band”, from ‘Gone Glimmering’, directed by Scott Marshall)

“It’s not like we’re out to desconstruct rock, but when we started the band, we had an agreement that we wouldn’t play anything that sounded like something we’d heard before.” – MATT SWEENEY (speaking to Billboard in 1996)

“For me, Chavez was this perfect creative beast. We had all these annoyingly strong ideas about what we wanted to do, and we did them. We did them exactly.”
– CLAY TARVER (speaking to The New York Times Magazine in 2011)

(“Unreal Is Here”, from ‘Ride The Fader’, directed by Clay Tarver and Scott Marshall) The quartet of Tarver, Sweeney and crack rhythm section James Lo and Scott Masciarelli never quite broke up — they just take many years inbetween gigs (and many more years making us wait for a third album). But there’s an awful lot to be said for leaving a flawless recorded legacy behind, and 1995’s ‘Gone Glimmering’ and 1996’s ‘Ride The Fader’ are unbeatable slabs of thinking-person’s loud rock from an era where such sounds were not in short supply. To say both albums have grown in stature and influence years after their release would not be an exaggeration, but that’s precisely why we’re taking brutal advantage of the situation at this very moment.

Preorder from The Matador Store :
‘Gone Glimmering’
‘Ride The Fader’