For some reason that I can’t explain there has always been a seemingly high concentration of Madison, Wisconsin transplants here in New York City.  I mean, it’s New York so you’re bound to run into someone every couple of minutes who isn’t from around here but it seems like everywhere you look there’s some kid from Madison.  And it seems like those who know what’s up all say the same thing – Madcity Music Exchange rules.  So as you should do anywhere you go, trust the locals.

1. Tell us briefly about your store.
MadCity Music Exchange was started in 1981.  Moved to our current location in 1989.  Has long been know as Madison’s place for music fans, hipsters, band dudes/chicks and other arty/low life types.  It was purchased by long term employee Dave Zero in 2007.  Since then it has gone under major renovations and now has a larger and more diverse stock of new and used vinyl and CDs.  Specializing in new releases and hard to find titles.

2. What got you into the independent record store business?
I’m the rare success story of the hang-around-long-enough-and-they’ll-have-to-hire-you philosophy.

3. Who are some of your favorite contemporary stores?
Green Noise Records in Portland is great!  I also really like TD’s CDs and LPs in Bloomington, IN.

4. How have things been going from a business perspective?
The remodeling and expanding of stock has really started to pay off.  We’ve been doing real well.

5. What do you think spells the survival for an independent record store today?
Survival for a record store these days depends on a few things: 1) knowing what your customers expect to find and having it  2) being able to surprise your customers  3) being able to juggle a lot of different ways to find income  4) having a niche that’s needed in your town

6. What are some of the coolest thing labels have done with you? Instores? Promotions? Sales?
We had a instores with The Black Lips and Peter Case that were great.  We also had some fun giveaways from Drag City.  We are up for trying just about anything.

7. Why do we need record stores?
We need record stores because everything else in the music world has become so impersonal.  Reading a review on Pitchfork than downloading it while sitting all by yourself on the couch is a terrible way to live.  Record stores open give you a sense of adventure that should always be part of music.

8. What kind of taco is your favorite?
The one my wife makes me for dinner. 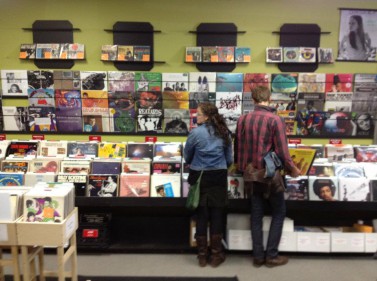 9. Who are your top 3 favorite bands right now?
Imposable for me to get it down to three at any one time.  Sorry.  Recently I’ve been obsessing over: Eater, Abner Jay, Horse Feathers, Nick Lowe, The Spits, Michael Rother, Ebo Taylor and some solo Bob Mould albums I missed the when they originally came out.

10. What is your favorite thing about your store? And you can’t say the customers. That’s like saying Einstein or Ghandi when asked “If you could meet one person, living or dead…”
I love the way it looks now.  As mentioned, we’ve been remodeling off-and-on for about four years and finally have it looking good.  It’s spacious, bright and welcoming.  It also has a stage perfect for instores.

11. What are your goals for the future of your store? Long term and short.
Short term: we’ll be revamping our website be e commerce and more interactive.  And getting a new sign for the front on the store.  Long term: Keep selling new and used CDs and vinyl to people who love music.

5 thoughts on “Get To Know Your Local Independent Retailer Vol. 19 – Madcity Music Exchange”