Earlier this week we answered the question that everyone had been asking; “Who is going to win the Belle and Sebastian ‘Write About Love Contest?'”
But as questions beget questions, now everyone wants to know “Who the hell is John Ficenec?”
Well, after a short but relatively arduous search, we’ve located the lucky fella behind the billion dollar essay about young love (no, he doesn’t get a billion dollars*. Even better. He gets to hang out with Stuart Murdoch for a day and then have a Belle and Sebastian song written about him to be released as a limited 7″).
A little more about John: 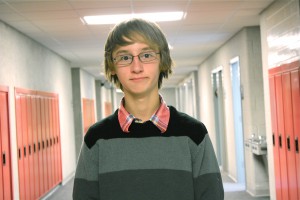 Where are you from?:
Omaha, Nebraska.

When/where did you first hear of Belle and Sebastian?:
I heard The Boy with the Arab Strap in a skate video.

What else do you listen to?:
Animal Collective, Panda Bear, Bright Eyes, Elliott Smith, Owen Pallett, Vampire Weekend, The Pains of Being Pure at Heart.

What are your favorite new bands?:
James Blake, Smith Westerns.

Old bands?:
The Clash, The Pixies, Simon & Garfunkel, The Kinks.

Why did you decide to enter the contest?:
Just for the heck of it and for fun.

What was it like when you found out you were in the Final 5?:
Crazy. I had a free period at school and starting freaking out.

We informed you on a Thursday that you were one of the 5 but didn’t tell you that you’d won until the next Tuesday. What was the wait like?:
Not that bad, just a little anxiety here and there.

What was it like when you found out that you’d won?:
Amazing. I had gotten done with gym class and checked my phone and saw a missed call and voicemail and decided to call back and found out I won. I was very ecstatic.

Do you have a record player? Will you be able to play the 7″ that is YOUR SONG?:
My grandmother has one so yes.

What do you plan on showing Stuart when he comes to Omaha?:
I would like to show him around the Old Market, my neighborhood, a restaurant called Amsterdam Falafel and Kebab, and a bakery called Jones Bros Cupcakes.

What’s the one thing Stuart should know about you?:
I am an avid photographer.

*Legally, I had to say that.

4 thoughts on “Who is John Ficenec?”