As previously announced, we are releasing über-talented Philly singer-songwriter Kurt Vile’s second album Childish Prodigy this fall. Release date is October 6, and you can see the artwork above. This absorbing, addictive and richly detailed album covers an immense amount of ground compared to its predecessor, from the pounding stomp of “Hunchback” and the hypnotic beat of “Freak Train” to the unexpected, soaring trumpet in “Amplifier.” The first MP3 from Childish Prodigy is the lovely, haunting “Overnite Religion”:

It’s becoming a habit for us to release a 7″ before an album, and Kurt is no exception. “He’s All Right” will be in stores on September 8. The A-side comes from the album, and it contains two non-LP B-sides. 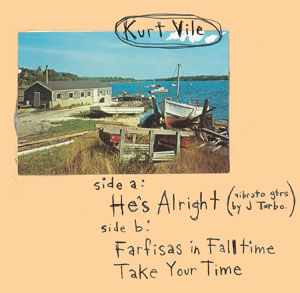 You will have multiple opportunities to see Kurt Vile this summer, both solo and with his backing band the Violators (those dates are marked *). There will also be a national tour starting shortly after the album release date.

Preorder Childish Prodigy (use the code “childish” for a 10% discount on your order)
kurtvile.com
myspace.com/kurtvileofphilly