This past Saturday at the Wexner Center for the Arts, on the campus of THE Ohio State University in Columbus, OH, Times New Viking offered a Valentine to rock and roll and modern art, closing out the museum’s six-month-running Andy Warhol: Other Voices, Other Rooms exhibition with a set of cover songs by the incomparable Velvet Underground. 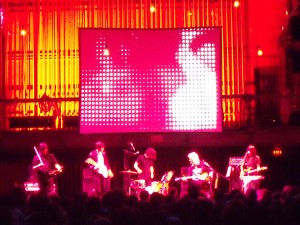 The show actually concluded with an acoustic “After Hours” singalong, featuring members of opener Psychedelic Horseshit as well as a vocal contribution from the one and only Ron House.

On a Valentine’s Day in Central Ohio, Times New Viking channeled the deposed spirit of rock and roll’s greatest band, and moved the crowd, melding their own distinctive blast-first-second-and-third rock mentality to classic jams never far from anyone’s heart.