Yet another shining example of bringing together fine music and comedy.
A.C. Newman joined (far left) Dave Hill, host of the Dave Hill Explosion, Carl Arnheiter (in elf hat), and Brett Gelman (as many New Yorkers know as “Little Bit o’Luck” which can’t be easy when he’s at the deli) as special musical guest at the Upright Citizen’s Brigade theater last night. Carl sang “Get Guilty” and “Drink to Me, Babe, Then” and then gets interviewed about his Canadianness, the burning question being Triumph or Rush, and which of Carl’s two bands brings him most pleasure. This is all after the audience gets assaulted by party poppers, flying chocolates, a midget wrestling Dave with nunchucks, and a song and dance by Mr. Hill. It was certainly a night of holiday cheer and man love. 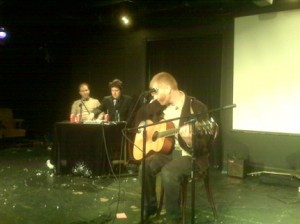 One thought on “ha!”