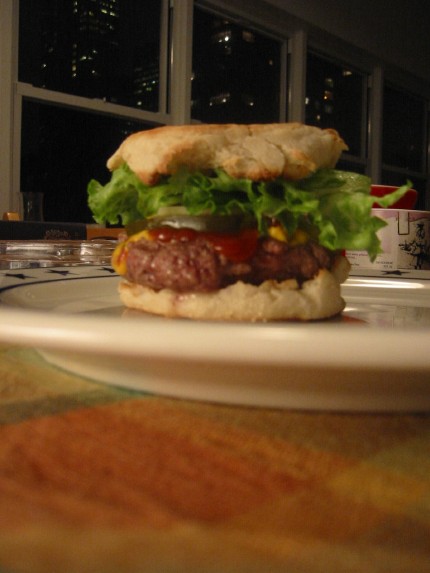 I’ve recently been obsessing about West Coast burgers, which typically use thinner patties, more toppings and place a greater emphasis on proportion than those from around here. East Coast burgers can be as thick as baseballs, the emphasis is on grilling and quality of meat, and individuals put on their own condiments. My attempt to combine the two failed miserably, so this time I tried to go purist. For meat I chose fatty ground chuck (grass-fed) from Ceriello’s at Grand Central. I formed 4 patties where I would usually make 2 (from slightly under two-thirds of a pound of beef), handling them as little as possible, and making them very thing. Burgers contract and puff up during cooking, so these had to be extremely thin. 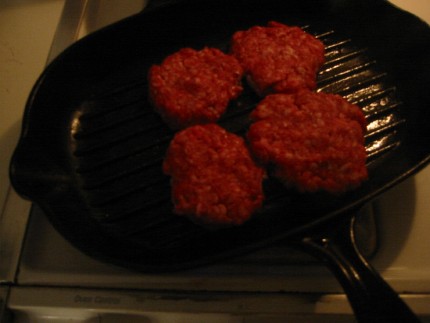 I heated a well-seasoned cast iron griddle pan to very high, rubbed it with a little butter, and placed my patties in it. Simultaneously I put English muffins in the toaster. I would have preferred to use the kind of egg-flour (or is it potato-flour?) rolls that you get out West, but these are not the kind of things you can buy at Grand Central or my local deli, and I didn’t have time to hit the supermarket. Not that a NYC supermarket would be a slam-dunk for finding those either.

All my eating is really just trying to find an excuse to eat bread-and-butter pickles. But they really are a necessary condiment for West Coast hamburgers. Result was beyond delicious. Though after second one I ran out of English muffins. Next time I need to apply American cheese (an obvious gaffe here), and that mysterious and wonderful substance SWEET RELISH.